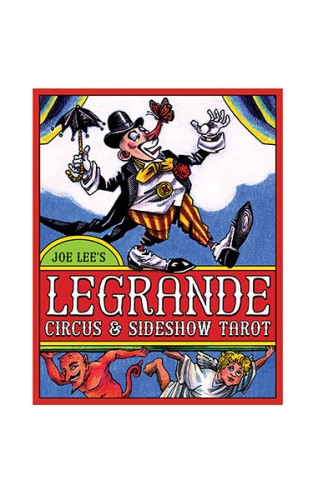 Filled with circus and sideshow lore, LeGrande Circus & Sideshow Tarot is set in the glitter and mud world of the mid-century truck show. The Major Arcana is colorfully illustrated in the bravura style of vintage circus posters. Each tarot archetype is represented by a corresponding icon of the circus: the Emperor as the ringmaster, the Hermit as a tramp clown, the Sun as the blazing figure of a tiger leaping through a ring of fire.

The Minor Arcana offers glimpses of  the day-to-day life of the circus and sideshow with each suit representing a different aspect of life on the circus lot.  The suit of Cups is the world of performance under the big top.  The Swords are embedded deep in the bizarre and sometimes frightening heart of the sideshow. Each symbolically charged pasteboard will “step right up” and take the user deeper into this mysterious realm. The Coins represent the business of the show—the “front-end” with its managers keeping the troupe on the road and the “butcher” hawking his “floss” and popcorn in the stands.  No one enters this realm of dreams without the work of the Wands, which conjure the backbreaking work of man and animal to raise the tent and create this palace of wonder. The stakes and tent-poles are the magic wands of this suit and no show can exist without the elemental magic of sweat and strain.